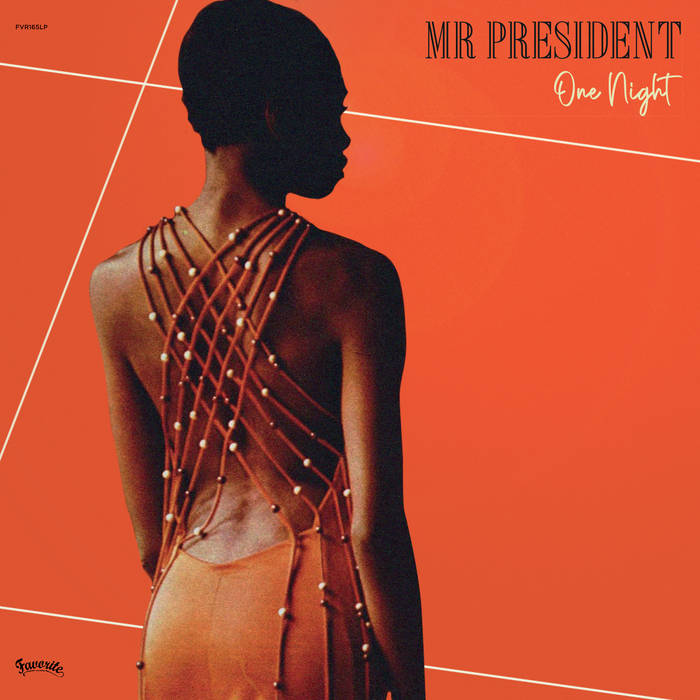 We don’t really know Bruno “Patchworks” Hovart’s secret but we’re always thrilled to get a taste of his proven production skills. After two acclaimed LP’s as Mr President released over the last decade, the Disco ruler is back with some groovy ideas to put the country into clubs again. One Night is indeed a shiny celebration of the genuine spirit of Soul and Disco, always coming with Bruno’s modern touch, fitting all the criteria to become an instant club classic.

From start to end, Mr President’s blend of grooves and subtle jazz harmonies brings a definitive Roy Ayers’ feeling to the compositions. Developing his vision along six titles, Mr President certainly knows how to produce hits for modern dancefloors. Just like on his previous albums, Bruno plays most instruments, when not even singing catchy vocals. One more time, he also brought incredible lead singers in the studio, some you may know from different projects already released on Favorite Recordings, like Jennifer Zonou (Hawa), Cindy Pooch & Celia Kameni (Saving Coco) and Sabba MG (Mr President’s previous releases). Thanks to exciting arrangements, they carry the songs to a certain climax which reminds the great US era of disco and house divas. Along the original compositions, Mr President also tackles the challenge of covering Roy Davis Jr. & Peven Everett’s house anthem “Gabriel”, bringing the track into even deeper jazz territories.

Of course you may know Mr President from his previous LPs, Number One (2011) and Hips Shaking (2014), however you might also know him under many of his other projects, such as Voilaaa, The Dynamics, Uptown Funk Empire, Metropolitan Jazz Affair or Taggy Matcher to name just a few. Patchworks has been a ubiquitous artist since more than 25 years now, from the House years in the nineties to his recent involvement on different Favorite’s releases like Joao Selva, Pat Kalla, or the last EP of Leroy Burgess & Saving Coco. More globally, through all these years and various projects, Bruno “Patchworks” Hovart’s established himself as an unequalled producer, both in term of quantity and quality, fulfilling his wide passion for music and groove. Some could compare his path to famous predecessors such as Patrick Adams, Pierre Jaubert, Patrick Cowley or Jean-Pierre Massiera, who like him, have all stayed quite underrated and in the shade of the many classics and hits they gave birth to. Who knows where the future will bring him, he’s not finished yet feeding our ears!

All instruments by Bruno "Patchworks" Hovart.